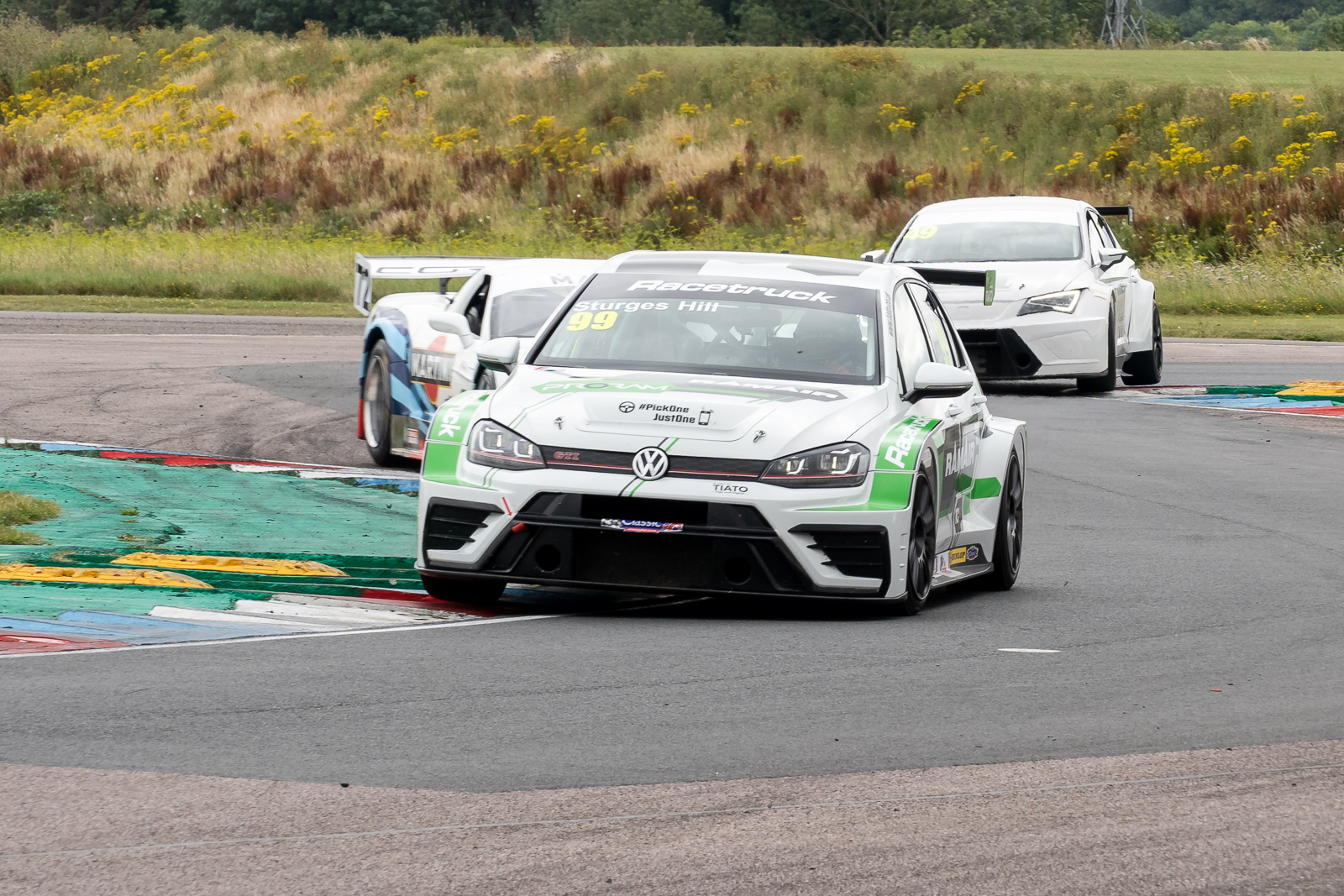 With all the qualifying and racing on the same day, there was only one solution – bring both TCR cars and a hot shot co-driver – Jake Hill, BTCC race winner, Racetruck UK Brand Ambassador and all-round nice guy.

With the Seat entered in the Open Series and the New Millennium races with Jamie at the wheel, and the Golf entered in the brand new to 2022 Slicks series with Jake and Jamie sharing the drive, at least there would some opportunity for the cars and drivers to recover….. 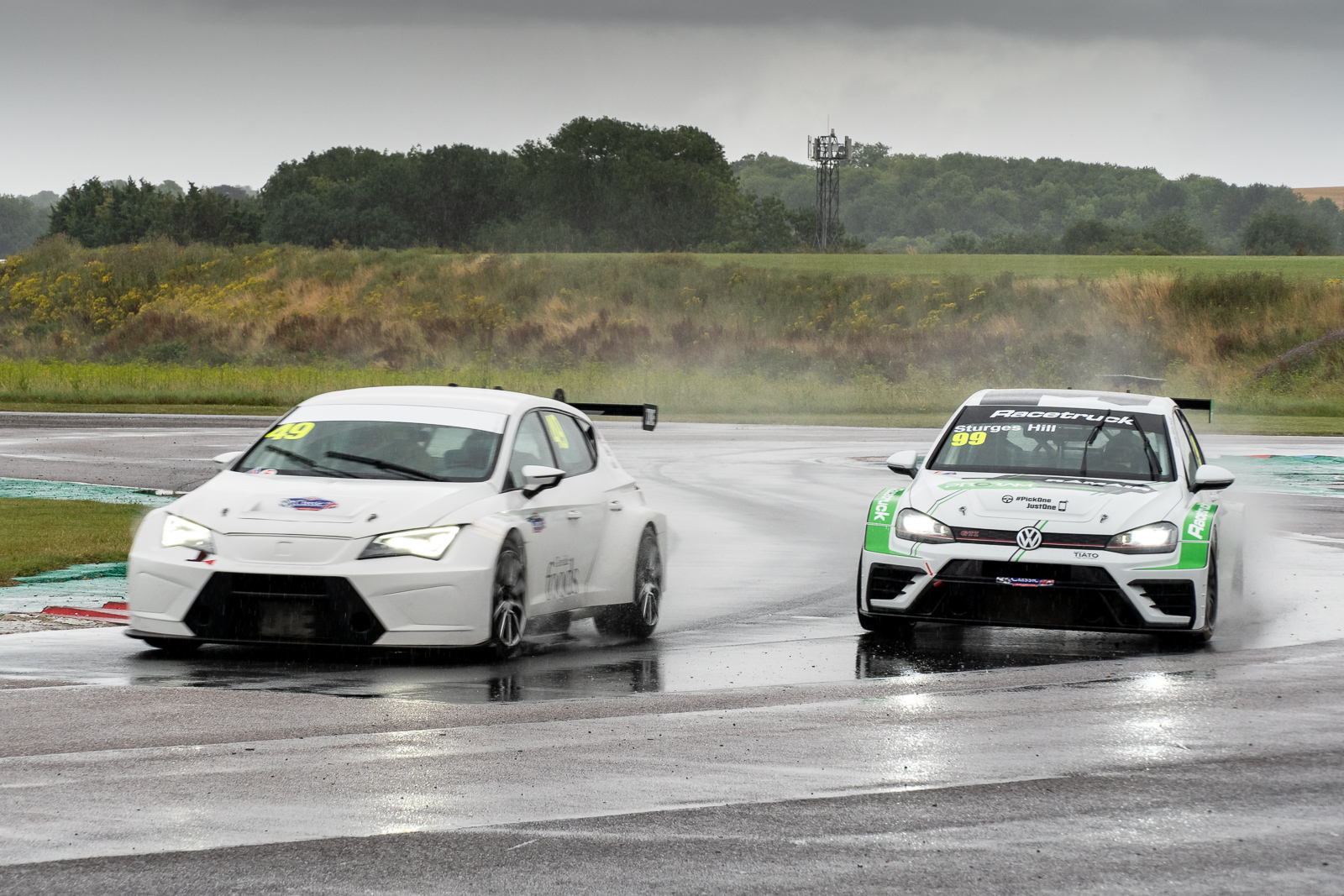 Racetruck had other ideas and when Jake wasn’t setting the timing screens alight in the TCR Golf, he was out in their awesome Mark 2 Golf GTi 16V in the Open race and the Future Classic Series, sharing with Dave Hickton of local VW/Audi specialists DPH Services. The little golf sounded incredible, pushing out 200hp on Weber carbs! See Racetruck’s youtube channel (insert link) for some incredible footage.

Last year the weather played havoc with the racing, providing different conditions for every race but the team kept Jamie at the front throughout topping the timing charts in every session – no pressure then this year when the weather gods got angry and gave us everything from up to and including a typhoon! 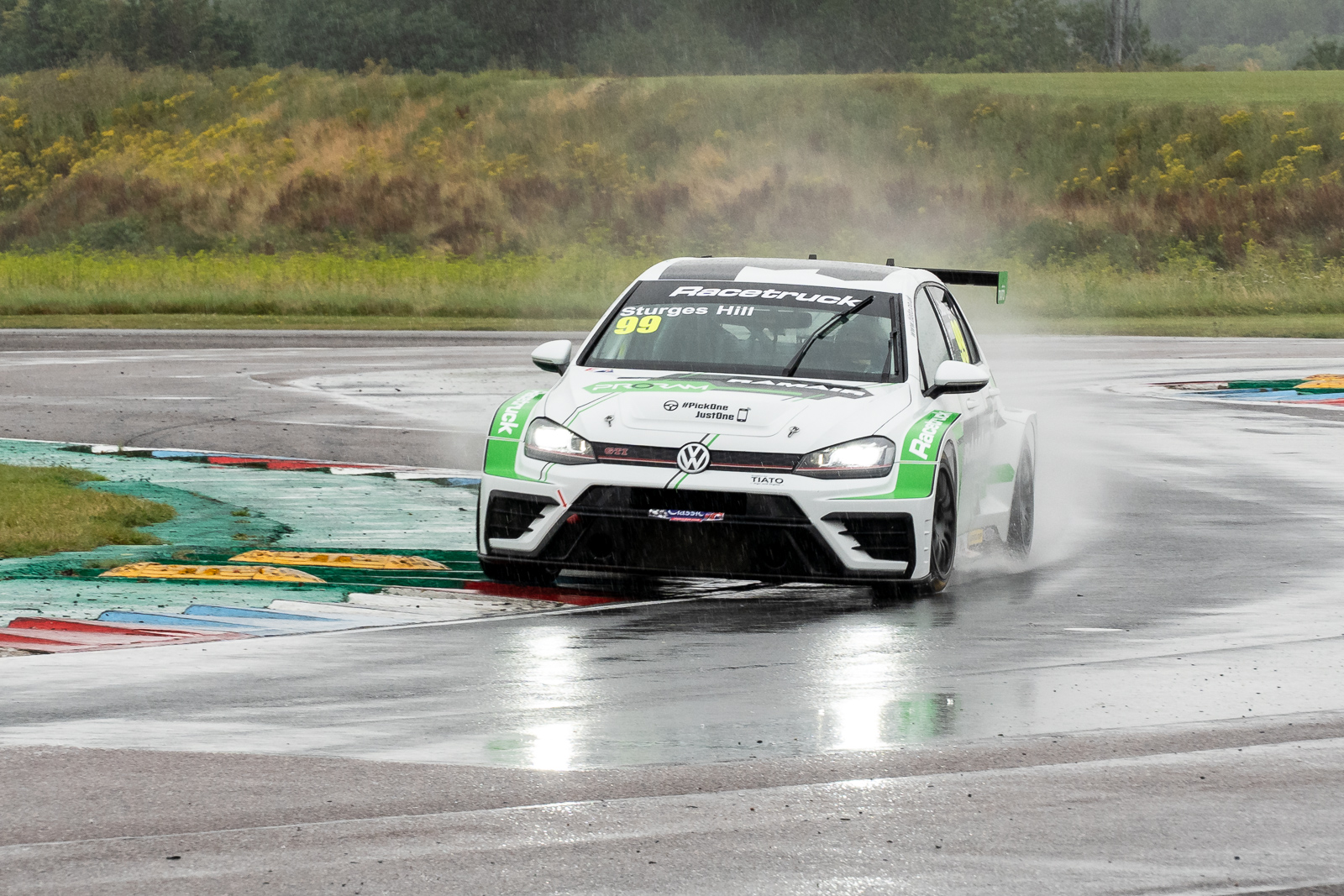 First session on track was the Open Series, a new format this year where the normal field is shared with the Jaguar Championship. As such the Jags would line up at the front for the race with the rest of the field leaving on a traditional Union Flag drop 20 seconds later so a good qually was essential to get a clear run at them. In the dry conditions that prevailed in the morning, Jamie took up where he left off last year and put the car on Pole with a 1:23.574 ahead of the immense 500hp BMW 1 series of Matty Evans and the ex Any Priaulx WTCC BMW of Domonic Malone.

Over to the Golf now for the Slicks Series where Jake was reunited with the very VW Golf TCR that he first drove for Brisky racing in 2017. It didn’t look promising, with a Ginetta G55, Nismo GTR, Noble M12 and Porsche 991.2 Cup car all lining up against us. At home straight away, an incredible 1:17.516 on his 3rd flying lap put the Golf 1.2 seconds clear of the field for Pole No.2, but with the next 6 cars covered by less than a second, the race was shaping up to be a tight one.

The final qualifying session for the New Millennium was tight at the top with Jamie recording a 1:22.776 on road tyres. With the top spot being held by just 0.2s by the V8 powered M3 of Interceptor Racing the Seat left the pit lane with 2 minutes to go for an F1 style banzai lap but traffic compromised the run and we settled for a front row start. With the storm clouds looming, all was not lost. 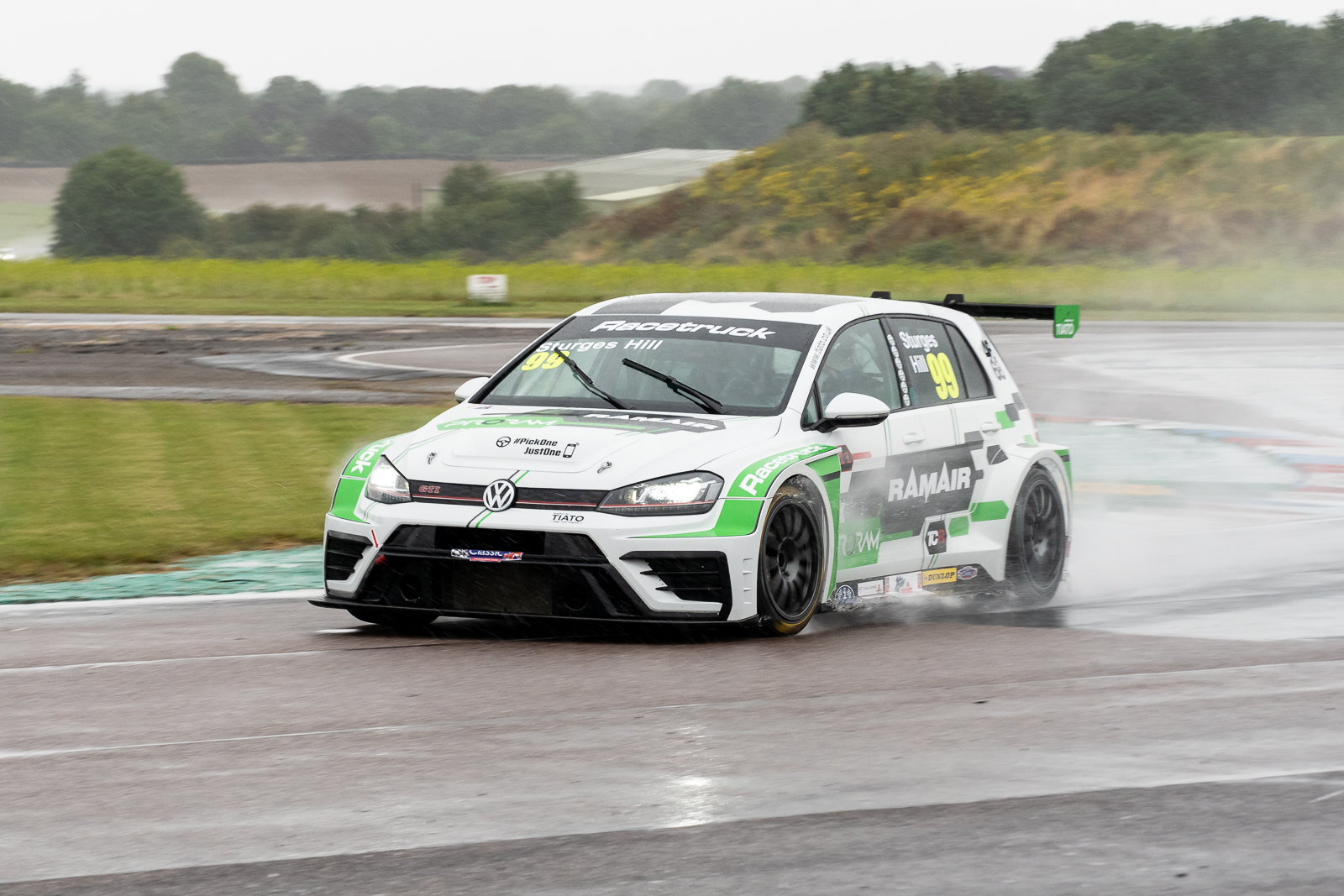 Lunch came and with it the rain in time for the first race start in the Seat. Covid 19 measures meant less time to prepare and earlier collection for race starts and the team worked hard to get the Seat onto the grid in time, still working on the wet set up changes on the car as we queued to join the field. Just to make life more challenging, the wipers took the green flag lap as their opportunity to stop working so the race plan was simple, get to and through the Jags in double quick time and find some clear track. As it happened, it was a textbook race in the end: The Jags went on the lights, we went on the flag drop – or more importantly we went on the “D” for drop.A great launch while the more powerful cars span their wheels, then we built a gap quickly and caught the field of Jags on lap one, with half a dozen between us and the rest of the open field it was then just a question of managing the conditions to bring home win number 1, making a hat-trick of successive open series wins at Thruxton for Jamie. 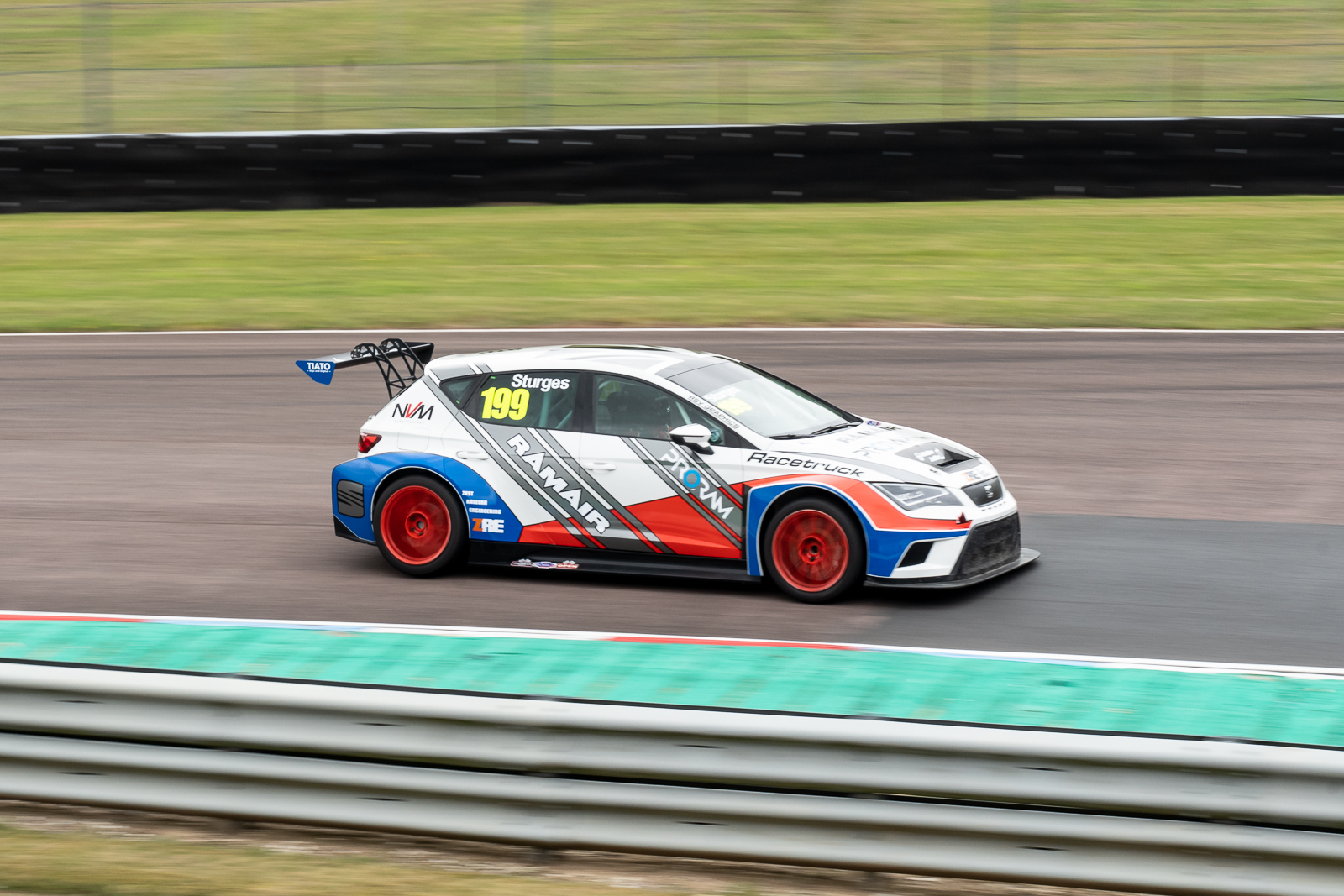 Ironically, with 40 Minutes to go before the inaugural Slick Series race, the heavens opened with the rain coming in sideways and flooding the track, paddock, the car, the mechanics, the tool boxes, you name it. With the wet tyres hastily fitted, Jake went to the grid in the in Golf TCR sporting our new road safety message #PickOneJustOne, aimed at encouraging drivers to put down their phone and concentrate on the wheel.

Snap quiz: How many people are killed or seriously injured every day in the UK by drivers who are using their phones? See if you know the answer…..

With another great launch in the Sequential gearbox driven car, Jake led off the line and quickly built a lead, but with the BTCC wet tyres degrading fast on the abrasive Thruxton surface the gap started closing before the pit window opened. After a timed 2 minute stop Jamie was back out but couldn’t hold off the rapidly closing Ginetta Academy driver in the G55, clearly relishing the assistance of a significant degree of downforce. 4th by the finish and 2nd in class by the end wasn’t in the script but there was a lot more racing still to go. 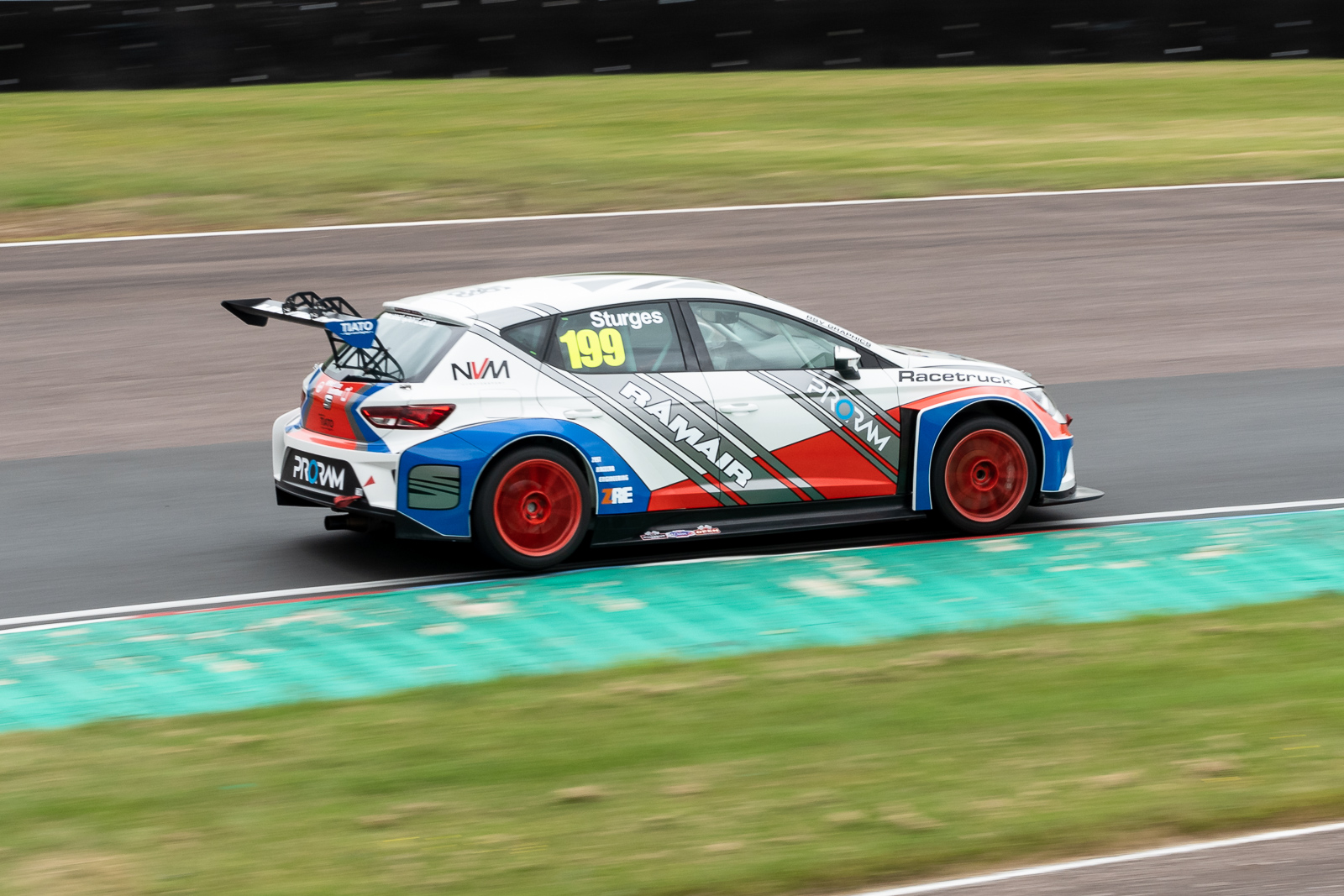 Back out and on pole again for the second Open Series race, but with a roll bar change to counter any standing water, Jamie set off in the same manner to try and replicate Race 1. However, with one of the Jaguars laying fuel for two whole laps on the racing line it was going to be anything but simple. This time the competition from Brad Sheehan’s Kuhmo BMW E46 was tighter, and when Jamie was pinned on the apex of Goodwood corner while passing a Jaguar, the BMW nipped around the outside off-line and generated a solid gap while the Seat recovered momentum. In the short race, the gap was too large, the car too wayward on the greasy surface, and the speed delta too small to make real inroads and Jamie brought the car home in 2nd place overall for a class win. Highlight of the race – a 110mph drift with loads of opposite lock through Church, the most feared corner in the country! 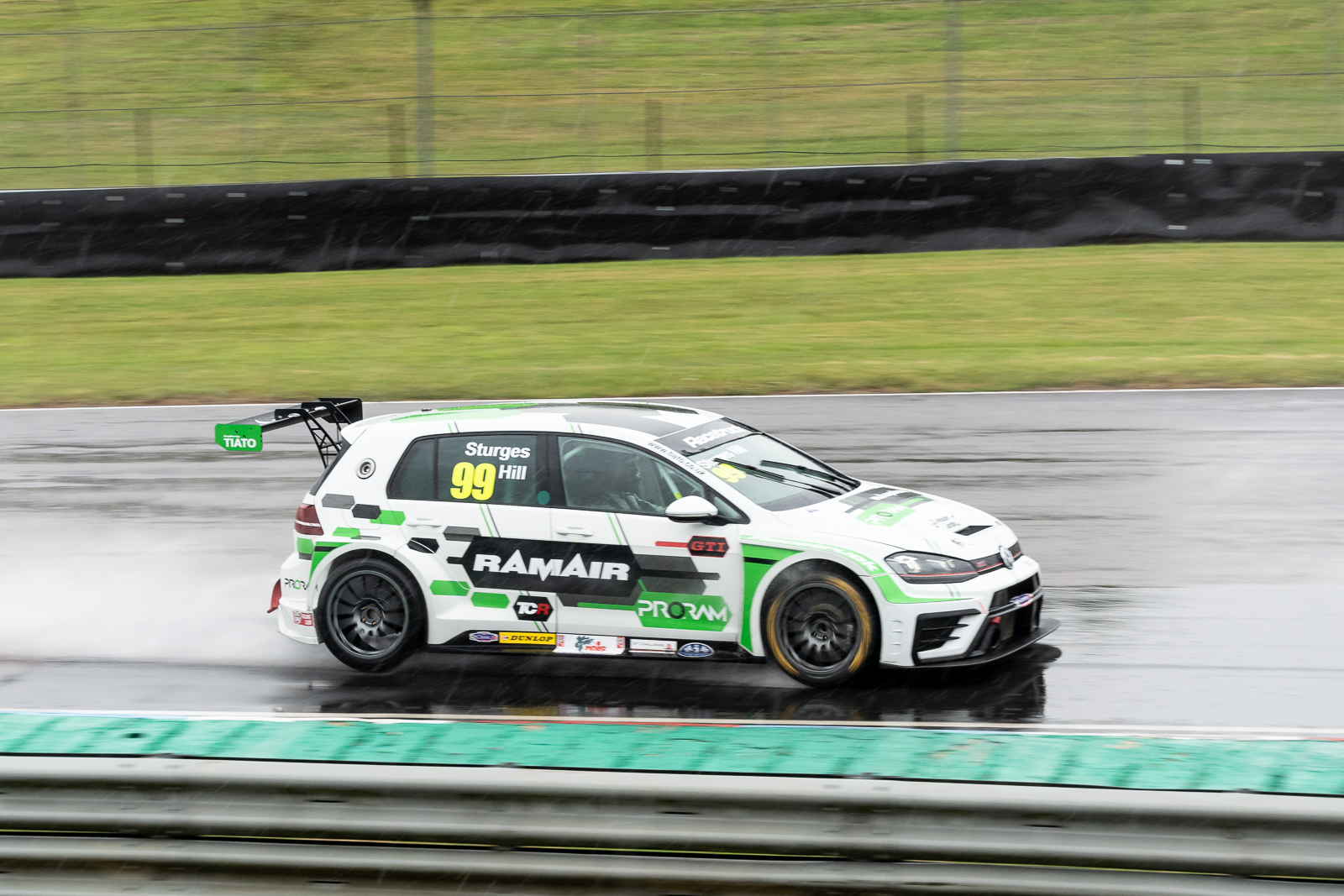 Now the tricky bit – The New Millennium race started just 15 minutes after the Open race finished and we are supposed to assemble 30 minutes before. Do the maths! In the minus 15 minutes we had, the team had to refuel the car and change the rear roll bar setting again. The car was still in the air on the jacks when the 1 minute board was shown and we left the assembly area near the back of the field. The rules still allowed us to take up our position on the front row, and with the added adrenaline flowing the launch was super sharp and the attack on the BMW immediate. By the second lap Jamie had the BMW compromised into the complex, leaving it no choice but to run offline at Cambell and defensive out of Cobb, Jamie put the Seat alongside the BMW exiting Seagrave and this is how the cars stayed, up the hill a foot apart, left into Noble with Jamie now offline, right into Goodwood, and only now did the BMW begin to fade on the looser outer surface heading around Village.

The next few laps were vital to consolidate the position and the gap grew, but after the timed pit stop, the Seat next rounded Allard to see the BMW coming out of the pit lane ahead. Nevertheless, the attack was the same and Jamie despatched their second driver promptly, building a lead of over a minute by the finish and lapping everyone up to third.

Some great results with two 1sts, a 2nd and a 4th, but scope for even more next year!

Watch out for our report from Snetterton next when we head to the flatlands for the Slicks Series and Open Series races. 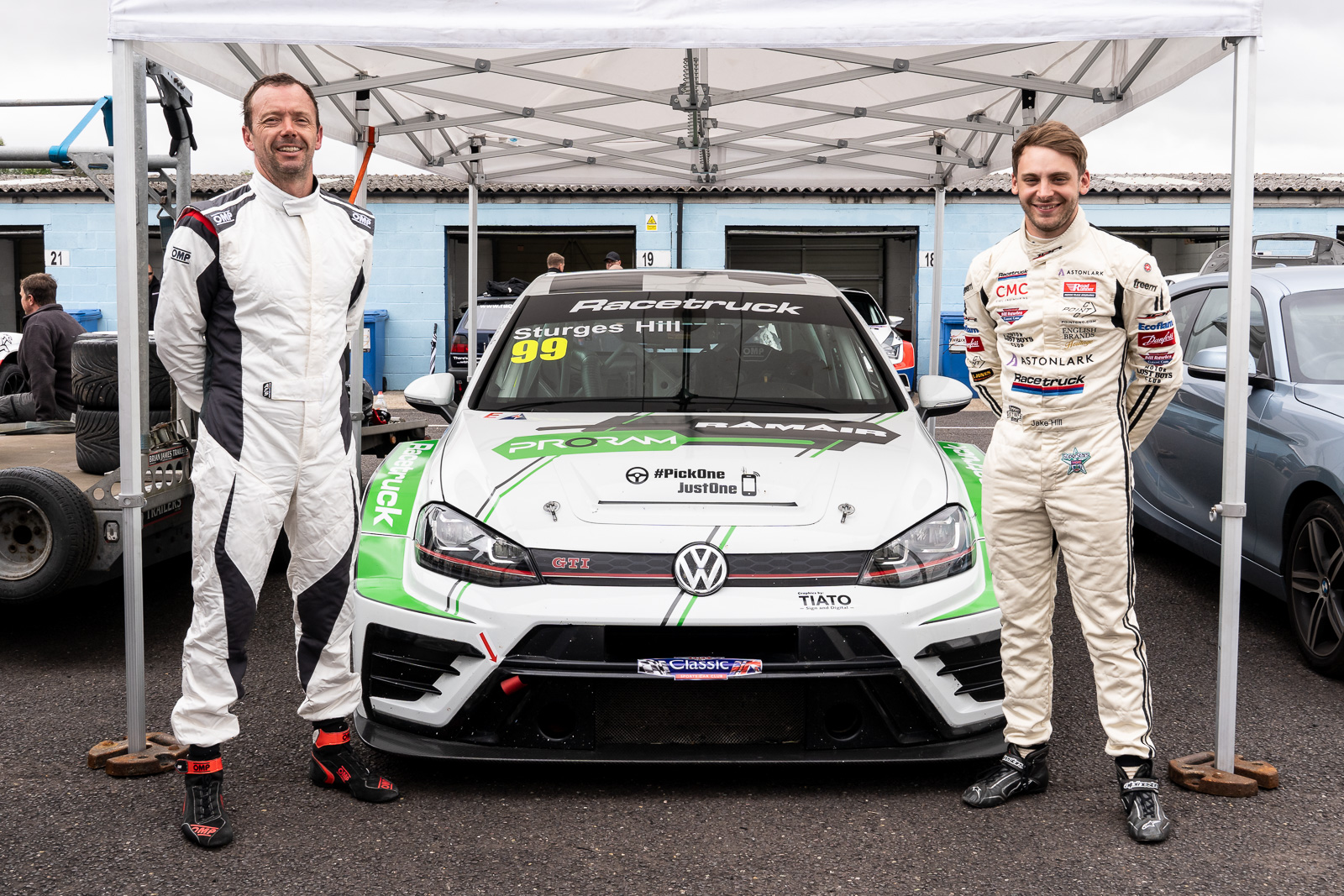 RacetruckUK for getting us there and providing their star driver.

Zest Racecar Engineering for battling the elements and once again giving us race winning cars.